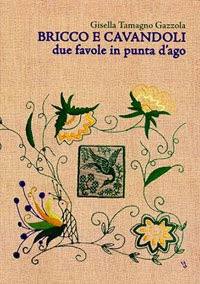 I encountered the term 'Cavandoli' when my work was described as Cavandoli work without truly understanding at first what it described. I later found just a few mentions of Cavandoli describing the knotting technique and attributing its name to a teacher in Italy. So a year or so ago, out of frustration after finding very little little information when I was researching to get ready for a lecture on Cavandoli Knotting at Bead Designer International in the Boston area, I asked one of my sister who lives in Ticino, next to Northern Italy to help me. After searching online, she mentioned right away Elisa Ricci, whom I was already familiar with and a book by Gisella Tamagno Gazzola, called 'Bricco E Cavandoli due favole in punta d'ago/ Bricco and Cavandoli: two fairy tales on a needle'. Amazingly this book was published bilingually, in Italian and English, making it much more accessible as my Italian is not fluent, and within this book I found the answers to my many questions: who was Valentina Cavandoli? In which century did she live? And why was this technique named after her?

Cavandoli is a knotting techniques in which double half hitches are used in a continuous fashion without any loose thread in between the knots. Each double half hitch is done by one thread over another by making two half hitches in sequence. This process creates an incredibly tightly woven like fabric with a 'warp and weft'. By using different colors for the warp and weft, patterns can be achieved by switching the knotting cord with anchor cord and conversely, warp becoming weft and conversely. Cavandoli evolved from Macrame, the ancient Arab technique usually done with openwork (loose thread) for fringes, shawls or table cloth. The term macrame is derived from Arabic for coverlet or Turkish for towel. Elisa Ricci, an eminent Italian historian on lace, is credited for giving the name of 'Cavandoli' to this technique. So let's explore how this come about. 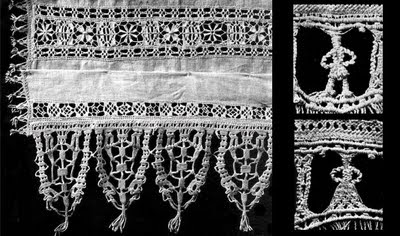 
I learned from Gisella's book that Valentina Cavandoli was born in 1872 in Reggio Emilia. She became a teacher and with her natural talent, later a headmistress. She took a course in the Montessori method and started a very unique experiment when in 1915 she became in charge of a school for children in need of assistance. Most of them came from families affected by the war or tuberculosis. Tina managed the school 'Casa del Sol' with an attentive and loving attitude and no problems arose. One of the methods she used to obtain such great results was allocating a slip of paper, a token, every evening to each child who had been well behaved. When 10 tokens were obtained, the child received a prize. But when the child was not behaving, he or she had to hand over collected tokens. She also instilled feelings of solidarity and justice by having children who received outside sources of foods or money from relatives and friends share with their friends who did not have any relatives outside the school. The recreational activities within the school included manual tasks. Tina taught the children a technique she had learned from her grandmother Virginia Lamberti who was an expert on macramé, especially the creation of colorful pieces of textile which became known as 'Cavandoli'.

'Casa del Sol' was truly a unique school. Both boys and girls knotted these pieces of textile that demanded time, attention, precision and discipline. They would have to apply basic math to copy patterns. The objects they created were sold in markets organized by the school and the money collected was placed in savings for each child. The amount each child would collect would vary, but it would provide them with some money when they left the school. The school had to close in 1936, as the Jewish community who had been its main supporter was facing their own many serious problems. Tina Cavandoli stopped teaching then and moved with one of her student's family. She died in 1969 after receiving the Italian gold medal 'on behalf of Public Teaching'.

Gisella Tamagno Gazzola's book shows the type of work the children did in Casa del Sol. It is very similar to work I have seen in books such as The Encyclopedia of Knots and Fancy Rope Work by Raoul Graumont and John Hensel, 1939 or the DMC Library Book Macrame, 1971.

A section of Gisella's book is dedicated to the actual technique with a well illustrated sequence showing how to knot the two-color version of Cavandoli Knotting.

Grazie Mille, Gisella, for filling in this part of the puzzle with your research of Tina Cavandoli's life.

Note: The artists I know, including myself, who have pursued this slow and intricate creation of Cavandoli knotted work, have often pioneered methods and personal approach to this art form surpassing the limitation of working with two colors and the two dimensional fabric this method tends to create.

This entry is re-published from a post published on 10/25/09 on Marion Jewels in Fiber Blog.
Posted by Marion Hunziker-Larsen at 4:06 PM